Jay Batlle loves German art, French food, and English women, though not in that order. The 33 year-old artist is currently in fine form—his work can be seen in Swell, a sprawling group show about surfing since 1950, now on view across Chelsea, at Nyehaus, Friedrich Petzel, and Metro Pictures. Batlle’s work is topical—he’s made sculptures about debt with his own maxed out credit cards. His main preoccupation, however, is food. An accomplished chef—he roasted five suckling pigs for his opening last year at Nyehaus—he makes drawings on restaurant stationery that are odes to gastronomy in all its old-world glory. Batlle was raised in California, and studied under Baldessari at UCLA; he was the first graduate student ever expelled from the prestigious De Ateliers in Amsterdam. Now based in Brooklyn, Batlle cuts an unusual figure in the art world: He’s less likely to be found contemplating his private world of neuroses than drinking a glass of Burgundy in a seersucker suit. Who said artists can’t enjoy the good life? 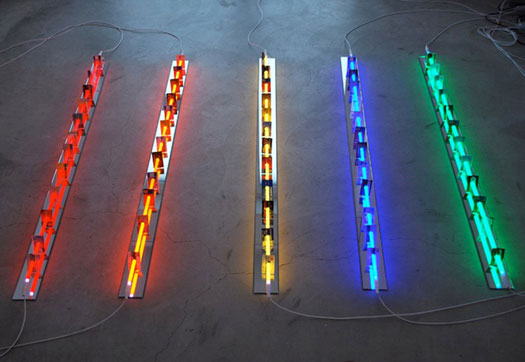 Why did you begin making sculptures about debt?
I wanted to represent something abstract in sculpture, but with a real weight in society. It came out as a way to deal with minimalism, my personal situation at that time, how much things cost, and how hard it is to be a sculptor in Manhattan. Judd talks about leaving New York to find a more reasonable way to make sculpture and wonders how the future generations are going to make their work in the city. 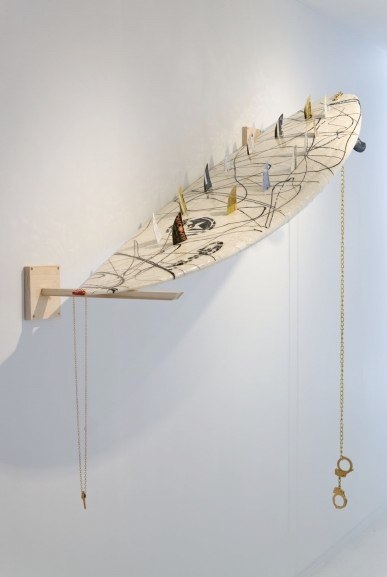 Can you talk about growing up in Southern California?
I went to Huntington Beach High School,  Surf City USA. It had a surf team which was more popular than the jocks, and a skate park, and I was captain of the water polo team. Kelly Slater, the world surfing champ, was a senior when I was a freshman. I was also a beach lifeguard at Camel’s Point Beach in Laguna, the largest alternative lifestyle beach in South California.  I also ran the grill at the Beach Hut—ranch covered cheeseburgers—and would have 40 going at a time, it was the only three months I’ve ever been a vegetarian. 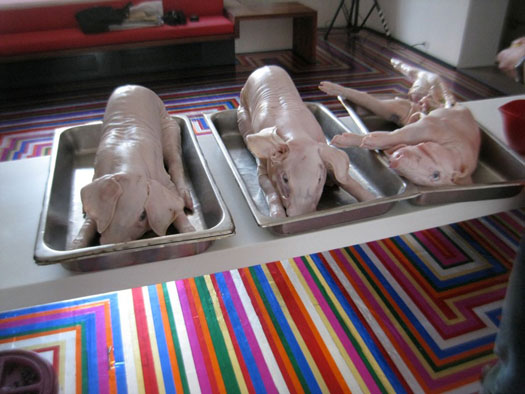 So you’ve always had an interest in food?
Well, yes, when I was 12 years old I asked my father if I could take a cooking class and found this weekend course with Chinese chef Ken Hom, I learned how to make Peking duck. It was funny because it was a class for adults and mainly couples trying to do something “different,” so we all cooked together and sat down for this big fancy dinner, and I was the center of attention, which must of been how Doogie Howser felt. Weirdly, Ken Hom has a place in Paris, where I think he lives, and the class was when I lived in Arizona, so years later when I was cooking in Paris this experience came up again, My mother-in-law has his cookbook, and I used to have one signed by Ken, but my parents were never very good a keeping things, I mean I don’t blame them, I lived in 30 different homes growing up. 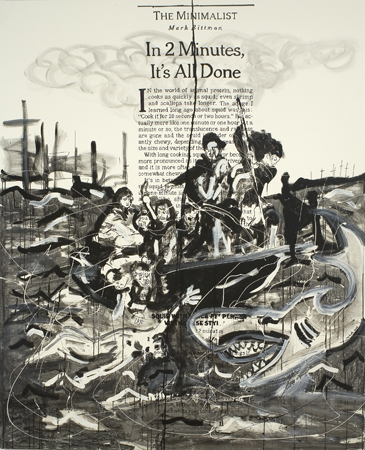 Did you ever meet him during all your time in France?
No, I’ve always wanted to meet him, but I think I also like the memory, which might be ruined. In Paris, I met Emilie Jean, the daughter of Michel Jean—the owner of Provence, the bistro in Soho. When I came back to New York I invited her to a dinner at my dealer’s loft, when we arrived we found that the caterers went to the wrong place, and somehow we had no food. As you can imagine I wasn’t too happy and slightly embarrassed, and eventually left that gallery, but Emilie took me to Provence. It was so magical—we sat in the front the of the restaurant, and she said not to worry and to order whatever I wanted. I had fluke ceviche sashimi, two gin martinis, steak frites, and creme brulee. She thought I was a “successful” artist—making money—but I barely had enough to tip the free dinner, so I think it surprised her when I asked if her father was hiring. I got the job the next week and ended up being the Maitre d’ there. I met a lot of artists there: Koons, Oehlen, Condo, Christo. It was a great job. Emile, coincidentally, worked, at Paul Kasmin, where I showed last year. I think she went on to Sotheby’s school in London, we lost touch though. The last time I saw her was my solo show in Italy, which was called Excellent Napkins, I was really surprised she was there—there were about nine people at the opening—but she happened to be in Milan, and the ironic thing was I was making works on linen napkins, all of which I had stolen from Provence, about 50 in all over the years there. So there’s the owner’s daughter at this show telling me how great it is, the napkins are rented so I was actually stealing from the linen company, but they expect a few to disappear or get ruined here and there. It’s funny how your past comes back. 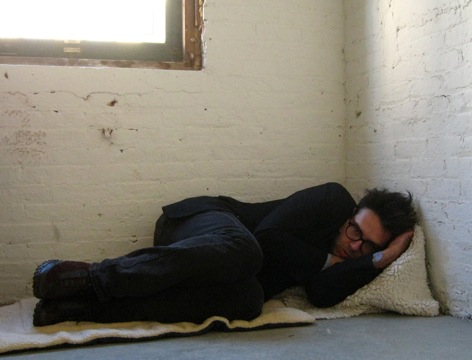 The Artist at Rest.

Your work combines conceptual conceits and the principles of pleasure. Can you talk about balancing those two qualities?
I called it California Conceptualism in school. I was trained to make conceptual works that elicit a visceral effect, but the formal and the content are just important to me. Good art needs to be experienced and can’t just be explained in print, you have to be there. Pleasure is what drives capitalism and it’s a form of masochism. I think a lot things look good, but they are about nothing, or just the echo chamber, my work has formal concerns and conceptual issues. It’s like surfing: you ride this object that could be secondary in appearance, and base its value on how it works on a wave. But surfboards are beautiful objects that can function as sculpture.