Artist and Chef Jay Batlle on Pop Art and Food 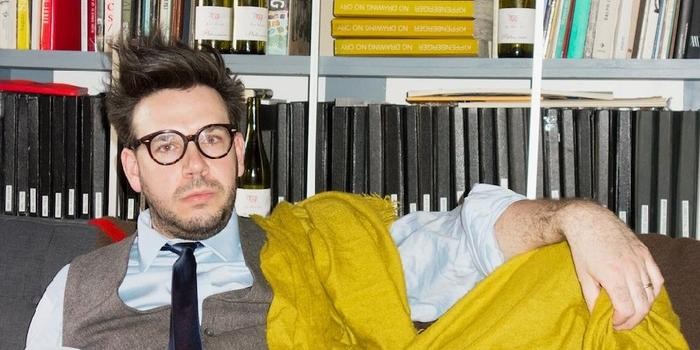 Gourmet food might not be the first thing that comes to mind when dicussing classic works of art, but practicing chef and artist Jay Batlle is quick to draw the connection between the two. Throughout his colorful, occassionally satirical critiques of the hedonistic fine dining culture, Batlle depicts the luxurious atmosphere cultivated by high-class restaurants and hotels. In this interview, the artist discusses the role food played in the developement of Pop art, the important and underappreciated creative aspect of the culinary arts, and what to eat when you’re in the south of France.

Click here to explore our collection of work by Jay Batlle.

The Stationery Series, an ongoing work in which you draw on hotel and restaurant stationery, calls to mind the work of Andy Warhol, who also used images of food to discuss excess. Why do you think food is such an effective means for this message?

It’s hilarious to think about Warhol and food because supposedly he ate nothing other than chicken noodle soup everyday. But you can’t think of Campbell’s soup or bananas without thinking of Warhol. Eggs make me think of Martin Kippenberger; cheese, Dieter Roth; ketchup, Paul McCarthy; fat, Joseph Beuys; and hamburgers with Claes Oldenburg.

Pop art and food are bedmates that are intertwined in capitalist society. One could argue that food and our desire to eat created Pop art, not just Richard Hamilton and advertising. I think the sheer fact of having to eat at least once a day to live creates a serial relationship to meals and cooking. For my art practice, cooking and eating are just some of the most pleasurable things I can think of. I also think of food as something that anyone can relate to. It’s a channel to discuss many things, including society’s excessive nature. Warhol knew how to give people what they want. I want them to have it all.

What do you think is the artist’s purpose in society?

One of the most important books I’ve read is The Dyer’s Hand by W.H. Auden. It has a short essay called “The Poet & The City,” which gives advice to a young artist/poet on how to find a way to make work in the chaos of the city. It describes the superfluous nature of making art, and how it has no utilitarian use for society other than the aesthetic. Auden writes the only arts that have purpose, real social purpose, are cooking and the culinary arts. He describes how future chefs will be famous and how cooking will be the most valuable of the arts, because you always need to eat. Cooking will always have a purpose and value in society. I took this to heart and started to conflate culinary structures with fine art practices. Out of this my restaurant stationery series was born.

In the series, you include stationery from establishments like the Momofuku Noodle Bar to the Spotted Pig. Since you’ve clearly dined at some of the best restaurants in Manhattan, where is the best place you’ve ever eaten?

That is a very tough question, but I think my favorite place to eat is at my wife’s family table in the south of France. We go there every summer to escape New York City. In France I’ve eaten some of the most amazing meals of my short life. Aged steak from Spain, black-footed ham, escargot, milk-fed lamb, wild mushrooms, most straight from the land they live on; things people will never get experience and are almost too good to describe. I do a lot of painting while I’m there too.

The Stationery Series involves a lot of suggestively posed nude women. What is the association between women and food here?

People collect art with financial aspirations as well as aesthetic. I wanted to make a body of work that critiqued the branding of contemporary art or artists, specifically in painting, but at the same time champions the Epicurean and Dionysian aspects of being a painter, the “romantic ideal.” I think that through contradiction you can escape capitalism. I’m questioning why someone “likes” something; is it the nude reclining, the gesture, the color, the scale in the picture, or did you happen to get married in the restaurant on whose stationery I drew on?

What made you want to become an artist?

I don’t think you ever “become” an artist; I think you are born one. It’s not a choice; successful or not I would still be making artwork in some way. My art is an extension of my life, not a sole occupation. I “became” an artist because you never retire, not even Duchamp retired. Goya painted stone deaf into his early eighties, and imagine how much work Warhol’s studio would have produced had he lived 40 years longer?